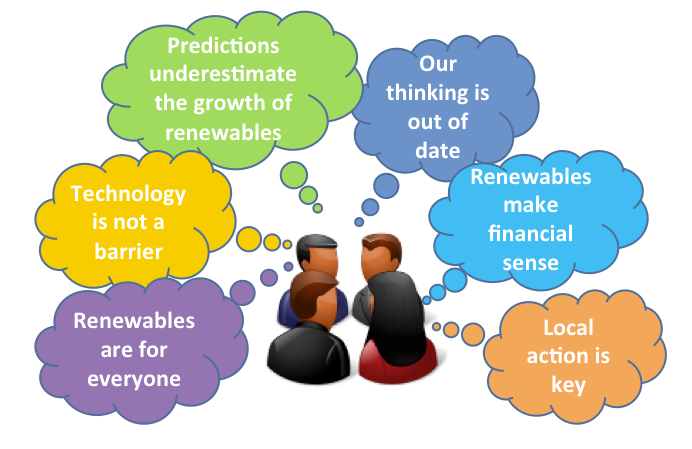 The future is here — it’s just unevenly distributed. This old quote found a new application at the Pathways to 100% Renewable Energy conference in San Francisco last week. An international crowd of energy experts, financiers, clean energy advocates, elected officials, government employees, academics, and more gathered there to discuss how to bring the renewable energy future to all.

Even those in favor of renewable energy have been known to debate how much of our power it can provide. But at the conference, the question was not whether we can get to 100%. Instead, speakers asked, How do we get there? And how soon?

Answers vary, and multiple approaches are needed — many of which were shared at this event. Out of all the details and perspectives, a few themes came to the fore.

Our thinking is out of date

What’s the biggest barrier to 100% renewables? According to keynote speaker Frances Moore Lappé, it’s all in our heads. That’s because it’s hard for us to see beyond our mental map and cultural filters. Instead of talking about scarcity and limits to growth, which are part of this mental map, she believes that to find solutions we need to reframe the issue. 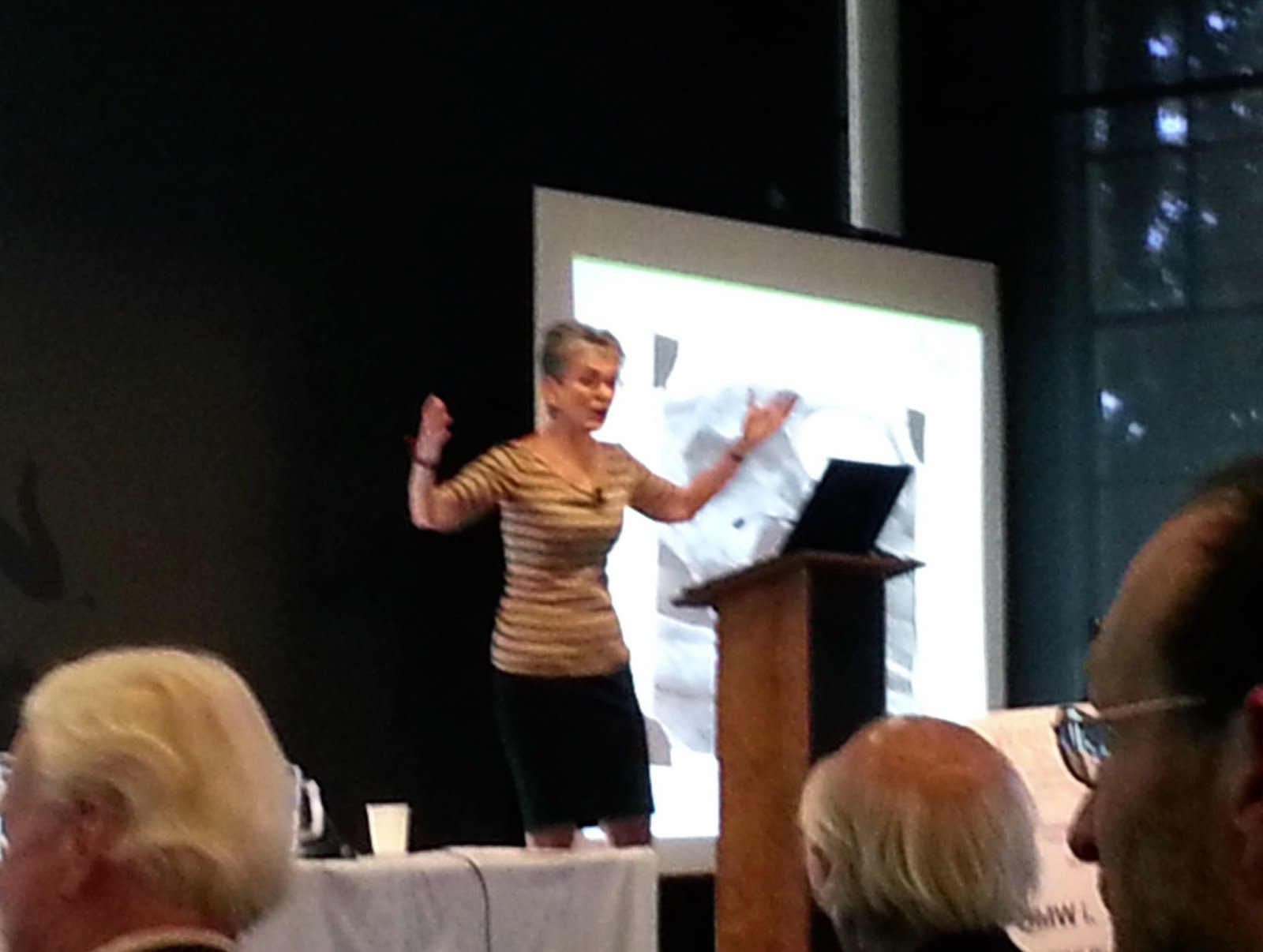 Other speakers echoed this sentiment and urged us not to let what we see today cloud our vision of tomorrow. After all, the one given in the world of renewables is that a lot will change. We too need to change when it comes to how we approach the problems.

We need to look at things differently. For example, why not switch to driving electric vehicles? Is it just because we’ve internalized and accepted the reality of gas-powered cars?

The same principle can be applied to the power industry itself; the industry’s current reality isn’t the only one possible. It’s bound to change as renewables make more sense economically, climate change becomes harder to deny, and consumers gain more control of power generation. Some say the industry won’t be recognizable by 2050.

In moving beyond our set views, we may realize that more is possible than we think. People said it wasn’t technically possible to integrate as much renewable power into the grid as Germany has done — and yet it was done, with no adverse effects.

Predictions underestimate the growth of renewables

That’s just one of many predictions gone awry when it comes to renewables. Keynote speaker Eric Martinot, after providing many examples of fast growth in renewables, noted that we’re already exceeding conservative scenarios. Projections from the World Bank and others have generally been a decade off or a factor of 10 lower than actual outcomes. That’s right: we’re heading down the path to 100% renewables more quickly than predicted.

Some areas have already reached 100%. Case in point: Rhein-Hunsrueck, Germany. Starting with energy efficiency and moving on to generating its own power, the region of 101,000 inhabitants now produces not 100% but 104% of its energy from renewable sources. The future is here.

Technology is not a barrier

So what’s holding us back? Speaker after speaker emphasized that despite many misconceptions, it’s not technology.

The many roadmaps we already have — such as IEA’s World Energy Outlook, recent NREL studies, the IIASA Global Energy Assessment, and the REN 21 Renewables Global Future Report — all show that the barriers to 100% renewables are not technological.

That’s not to say that technology isn’t important. Solar and wind forecasting will play a role in moving us to 100% renewables, as will demand-response technologies, storage, and microgrids.

We already have viable means of storing energy, and they’re only getting better. But most storage is not yet on the grid, because  the grid was built when it was thought energy couldn’t be stored — another example of how we need to change our thinking.

And our thinking needs to include transportation and buildings. Going all electric would reduce global energy demand by 32%, and EVs can help support the grid by storing power and sending it back to the grid when it’s needed there. Buildings, representing 25% of global energy use, can be made more energy-efficient.

A study of conditions in 2005 and 2006 showed that in that period, California could have met its electricity needs for 99.8% of all hours from solar and wind — without using demand-response, much storage, or oversizing. In Mexico, a combination of wind and solar can greatly reduce intermittency problems, with hydro or geothermal easily making up the remainder of electricity needs. Those who doubt these assessments need look no farther than the increasing number of areas that have already reached 100% or are close to doing so.

As more regions move to renewables, more people will see the value of making the switch. That increased public awareness and acceptance will help overcome the real challenges, which are social and political.

Costs can also be a challenge, but that too is changing quickly as renewables become more competitive.

The biggest cost of renewables is in the up-front investment; once they’re in place, they don’t need to be supported by infrastructure like pipelines. Many can be sited locally, reducing the need for costly transmission lines.

Nuclear power is not a good option when it comes to costs. Nuclear requires large subsidies and plants need upgrades and repairs, which always seem to cost much more than projected.

Meanwhile, fossil fuel costs are rising, even if you don’t count the many externalities like health care costs. We’re all paying for fossil fuels, in the form of $600 billion in subsidies in the last 60 years. What did we get for that? Increased power costs. When we subsidize renewables, on the other hand, our costs decline. So what’s the better investment?

Investors are catching on. For example, they’re beginning to understand solar as an asset class and are realizing it’s a great bet: It’s a proven technology, it harnesses an unlimited source of power, and the default rate on solar projects hovers around zero. Solar provides a hedge against volatile future power costs.

Investments in renewables are expected to double by 2020 or 2030. Given the way renewables tend to outperform predictions, perhaps we’ll see that even sooner.

And new business models are emerging to finance renewables as well as to lower their costs. That includes programs supported by the SunShot Initiative that help lower the soft costs of solar, which now account for about half the cost of solar systems in the US.

Given that we have the technology and the favorable economics, how do we get to 100% renewables?

We need strong, stable policies like Germany’s feed-in tariff, which has led to 40% of renewables there being owned by individuals. And that brings us to an important point. Power needs to be decentralized and controlled more by individuals and communities.

Hundreds of communities are getting into the action with policies and targets to support renewables. Some are taking up community choice energy, which allows local governments to pool residential, business, and municipal electricity loads and to purchase or generate on their behalf. It provides rate stability and savings and allows more consumer choice and local control.

Other communities are taking their own paths to renewables. Lancaster, California, for example, decided to become the solar capital of the world and is making progress toward that goal. This didn’t happen from the top down — it happened because the community decided it was important. With the will to make the change in place, it wasn’t hard or costly to implement policies to support the community’s goal, such as streamlining the permitting process.

Greensburg, Kansas provides another great example of a community-driven move to renewables. In 2007, 95% of the town was destroyed by a tornado. The community decided to rebuild in a more sustainable way, and now Greensburg is living up to its name as a showcase for how a community can go green. 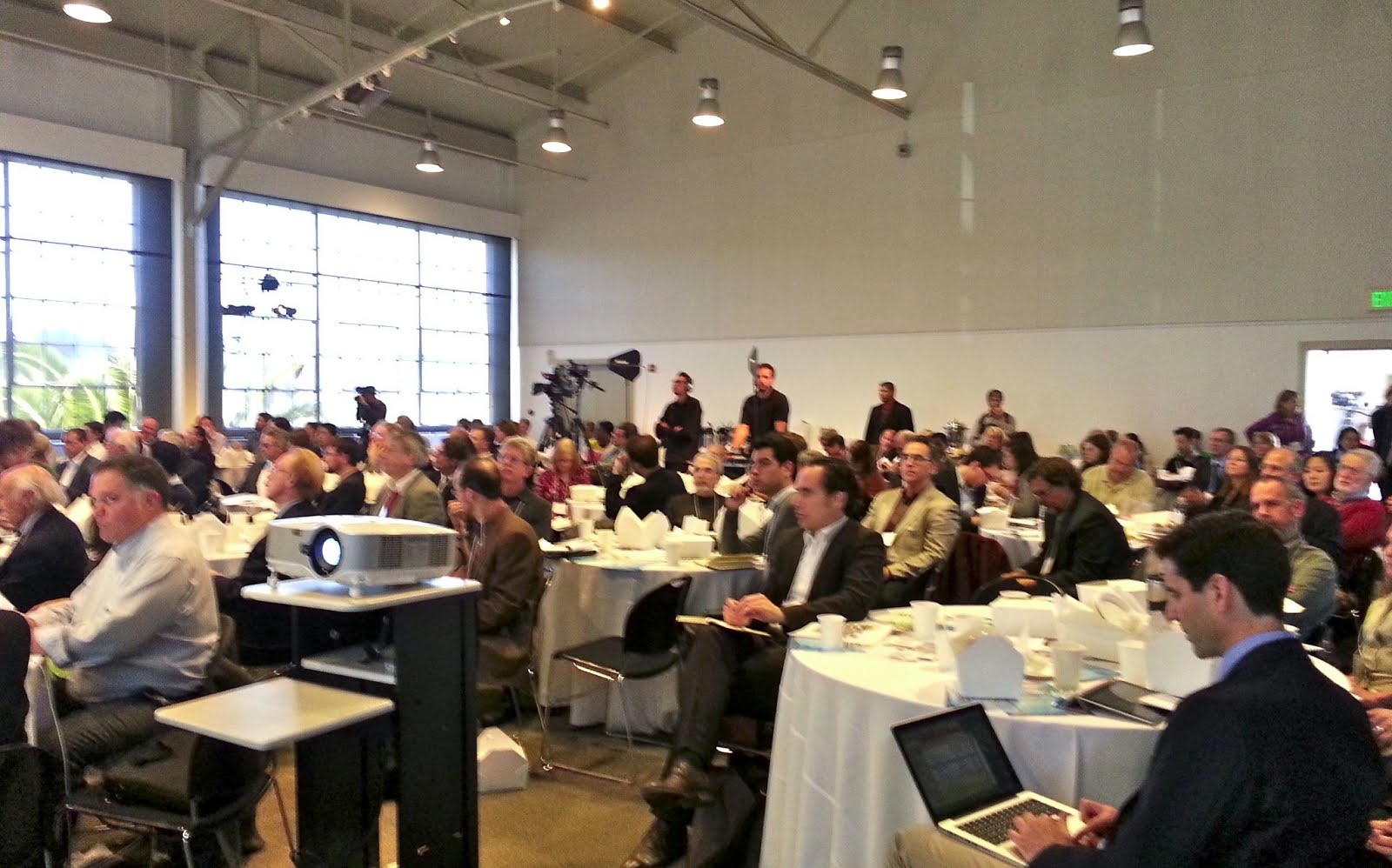 Part of the crowd of 180 conference attendees

Renewables are for everyone

As you can imagine, Greensburg is not a hotbed of radical environmentalism. But it’s a fine example that when it comes to renewables, there’s something in it for everyone. We need to remember this as we tackle the many misconceptions we face.

The people of Greensburg built on their farming ancestors’ heritage of conserving resources, reframed to fit their modern situation. Indeed, conservatism at its heart is compatible with protecting our planet. If that’s not compelling enough, most conservatives care about public safety and national security. And for most people, conservative or liberal, the strongest argument for moving to renewables is the economics.

Whatever the angle, it’s crucial to get the message out that renewables make sense. According to Kirsten Hasberg, that will be facilitated by the democratizer of communication, the digital revolution. She’s founded a new media outlet where she invites us all to participate in harnessing the power of that revolution, Energy Democracy TV. Another way to get involved and learn more is to join Go 100% Renewable Energy, a campaign just launched by a coalition of leading NGOs — including the Renewables 100 Policy Institute, which organized the conference.

As Stefan Schurig of the World Future Council reminded conference-goers, the path to 100% won’t be easy. Resistance tends to get stronger the more successful our efforts. But he left us with a well-known quote that’s worth repeating here:

First they ignore you,

then they laugh at you,

then they fight you,